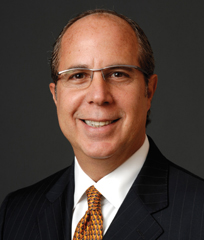 Gerard Santinelli joined Santinelli International in 1981 as Marketing and Sales Director, and was promoted to Vice President/General Manager ten years later. Gerard Santinelli has been working at Santinelli International since high-school, starting out literally sweeping the floors and organizing the stock room! After graduating from Boston University with a BA in Business Management, he moved through the ranks to Marketing and Sales Director in 1981 and was promoted to Vice President/General Manager ten years later. Gerard has served as President of Santinelli International since 1998, and then attained the title of Chief Executive Officer in 2002. Gerard is a member of the Vision Council’s Board of Directors and has previously served as Chairman of the Lens Processing Technology Division and the Show Committee. Gerard has been an avid supporter of the Special Olympics Lions Club / International Opening Eyes Organization and in 2004 was awarded the honor of “Special Friend” from the organization, which is dedicated to improving the vision care for persons with disabilities throughout the world. Gerard resides on Long Island. Like his father, Gerard is an avid boater and Yankees fan.